I found this the other day in the inbox:

“If you have Box shrubs, topiary or trees in your garden, there is a new threat likely to be coming your way in 2016.  That is the Asian Box Moth which creates caterpillars that can demolish a Box Ball overnight!  It is a threat from April to October. Last year this was largely confined to Central London.  But it will probably spread here (to the suburbs) in 2016. Here is a Box Ball in a garden in Fulham and last year it was demolished overnight by masses of hungry caterpillars.” 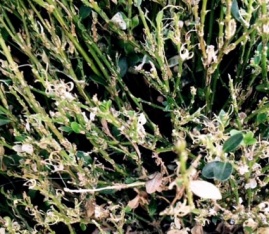 Yes, hurrah! – that’s what I think. Come on hungry caterpillars. Finally, an end to all the box balls and the box hedges.  An end to fag-end potted box around restaurant doorways. Yes! – an end to generic brushed-metal oblong planters. Canary Wharf will have absolutely nothing left that’s photosynthesizing.

There’s an end in sight to all the clipped lonely squat hedges, an end to the automaton notion of ‘structure’ in the garden.  The suburban doorways will no longer be framed by balls on stalks. The shears will sleep in the sheds, there will be horticultural redundancies.

Let’s have something else now in the city green please – something wayward, floppy and chaotic to replace the suburban box hell gardens and patios of England.

My only fear is that this fantastic opportunity will come to nothing, and all of the box will just be replaced by plastic ones.

I’ve posted before about humans and box hedging, and continue to look out for significant box encounters. There was a brilliant headline in 2014 – Monty Don ‘My hedge hell’ – where Monty tells of the sorry destruction of his 15 year structural hedge by the dreaded blight. Around the same time, I took these photos in London, over by Bankside I think – planters set against a hoarding advertising the next luxury flat development with massive box bushes ready to take over London.

On Thursday last I was at the National Maritime Museum in Greenwich. I looked out from the cafe and saw this magnificent site. Here, the gardener has realised the plant’s full potential, and put it on display to the general public. Incredible!

Oh, maybe I will miss the box after all.

Structurally, it just can’t be beaten.