I was invited to give a short presentation and meet up to talk with Portland Ecologists Unite in Portland Oregon, USA on 13th October 2106, as part of my WCMT Travel Fellowship looking at innovation in participation in public urban green space.

EcoUnite! works to improve the resilience of the community of ecologists by coordinating discussions, transfer knowledge, and build networks that create a foundation for quality ecological land management.

Toby Query started Portland Ecologists Unite five years ago in 2011. After attending a conference in BC and hearing about ‘novel ecosystems’, Toby was inspired to create a place to talk about ecology in an expansive and inquisitive way.

‘The conference blew my mind.  Conservation tended to focus on ‘kill everything non native and plant only native’ with no self-reflection on that. The conference had people talking about the faults of this mindset and discussed the positive effect of new arrivals providing natural processes – novel ecosystems.  We have to talk about all this. There are important issues at work – we have to deal with the complexity.”

“And my partner Tahni Holt, a choreographer and dancer, was hosting dinners with artists and everyone would come round and talk about a particular area or focus of work. I thought it would be good to have something similar happen around ecology.”

EcoUnite! meet once a month in the Green Dragon bar back room in NE Portland – people working in or interested in all areas of the environment, both volunteers and professionals, with teachers, land managers, ecologists, consultants, designers among them.  It’s grown really fast, with a list membership of around 450 people. Generally they have around 25 people at each meeting, with the talk about wolves drawing 150. People value the expansive and open minded agenda and topics.

“I wanted to invite people interested in ecology to meet together to talk about the dominant culture in environmental management and improving ecosystems.

“I grew up in Portland and lived near Forest Park. I grew up playing in woods, around birds and plants. I’ve spent 17 years as a Natural Resource Ecologist for the City of Portland. I’ve helped plant 3 million trees in and around Portland, and many tons of native grass and wildflower seeds! I’ve been involved in planting many trees on waterways to improve the water quality for salmon. A lot of money has been invested in salmon habitat restoration.  Now we’re asking – how do we manage land and environments in the long term where it’s not immediately obvious what we should do? And what are our future forests going to look like?”

One of the recent discussions at EcoUnite! has been around the growing population of houseless and homeless people living on the green spaces in and around Portland, and trying to understand the affect on biodiversity. This is a pressing concern both in terms of the scale of the human side of the problem arising from complex multiple reasons, and the impact on the environment (biodiverse or bird nesting habitat damage, creek and river pollution, sewage, refuse). 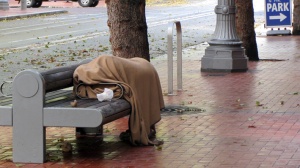 As a visitor to both Vancouver and Portland, I have been really struck by the size and scale of the homeless problem in both cities and the really difficult challenge it sets.  It’s a humanitarian crisis driven by the lack of affordable rent, sudden rent increases, unstable incomes, relationship break down, substance abuse, domestic abuse, mental health problems, and from the people I spoke to, it is getting worse each year.  In both cities, the homeless are present on many of the streets, public spaces and parks. And in the larger green spaces around the city, camps have also grown – at Johnson Creek in Portland, the environmental impact has been contentious and costly to manage. It’s a powerful problem, that needs addressing with care from many directions, and the EcoUnite! discussion reflected the complexity and concern.

PDX EcoUnite! generally host a speaker who presents for half an hour on a chosen topic, which then sparks a conversation. Discussion notes are taken and posted on their blog. These ‘points’ make for very interesting reading – for example the recent discussion about ‘nativenonnative’ raises views and thoughts of both cultural and environmental reflection, with transparency and curiosity.  PDX EcoUnite! talk about what it is to talk about ecology – what are our concepts, our ways of thinking? – how can we develop and expand our understandings both culturally and ecologically?

The greeting to welcome everyone and introduce is an elbow-to-elbow ‘salmon spawning’ action. It’s excellent.

I spoke about my interest in public green space arising from my work as a social artist meeting my fascination with the non human – animals, plants, creatures of all kinds – and how we participate in and relate to the environment.  And about the nature-human relationship and the meaning of ‘inquiline’ and the impossible possibility of being outside and inside nature: observing, questioning, seeking, doing, being, while all the time being part of it; we are nature.

And about a film I’d made which articulated some of these immeasurable complexities ‘Succession’.

I shared the initiative to make London a National Park City, information about the environmental charity I work for in SW London, and our biodiversity work.

I drew out the things that I encounter in my work that I find challenging, especially with reference to conservation and the lack of discussion about the role that culture plays in our decision making. For example, the dominance of images of volunteers out in green spaces with loppers, cutting back greenery, signifying environmental participation and action.  These kinds of images can be unhelpful in relation to how we ‘see’ people and nature – we’re stuck in a culture of control, tidying, human organisation, with a tendency towards attacking and dominating environments, without acknowledging that in the main, our behaviour is driven by our cultural attitudes and values.

The National Park City initiative in London is attempting to bring a new generation and a diversity of people into ecology and environmental engagement.  Much of the campaign is generative, creative and questioning: why are there no ball game signs on the only patch of grass? why is all the amenity grass cut? why aren’t children playing outside? – and that feels essential.  Co-leading some Dawn Chorus Walks earlier this year, I was aware how some people who came along were rather aloof towards others who wore unsuitable footwear.  It made me glad that I had letterboxed a neighbourhood and this was the first time some had stepped out at dawn to hear the birds. No one has a claim on what nature is or how to meet it.

At Eco Unite! it was an inspiration to sit among people who were up for questioning, discussing and figuring out what this whole environmental and ecological thing is about – conversation I long to have.

There were people working in nature conservation, bookbinding and design, people who hunted and explored in the wild, a plant geek, environmental scientist, and people from Portland Parks & Recreation and Friends of Trees. These kinds of cross overs of interests are vitalising.

Our conversation ranged and circled over many things – far more than I have noted here – these were some of the things that came up:

– it’s easier to control things the further you are away from them. People end up controlling the control.

– rivers function because they are messy. Stream clear outs in the 70s were habitat removal. The forest floor is rotting wood.

– I grew up with the idea that when you’re in nature, you’re doing damage

– I hear clashes of worldviews in my job – whether humans are part of the environment, or a part from it and different from it. Polarising views – we’re part of it and we’re making it, or we have to leave it alone

– we have a very ‘Western’ perspective on nature – got to stay on the path, don’t touch that frog – you’re part of it, but it’s better if you’re not in it.

– casual cruelty towards nature is generally acceptable – why is that? where does it come from? From Western culture / religious attitude that nature is there for humans to exploit?

– the National Parks are full of people, but off trail out in the ‘wilderness’, there are very few people

– there’s an upwelling of nature play and pre-school groups

– kids in Portland two blocks away from Forest Park don’t go there, there’s a disconnect from nature for them

– some people refer to the places that kids use for Forest School as ‘sacrificial space’? What does that say?

– trees are migrating due to climate change

– for Friends of Trees there’s been an expansion out of the white middle class ‘trees are important’ demographic in the last decade with a drive for equity. One of the important connections is between people, nature and human health. The cleaning of the air and the water and being in green affects us.

– the Backyard Habitat Programme in Portland has started to tackle the lawn! But notice it’s called the ‘Backyard’ programme because people still can’t accept long grass. The lawn is still so present as a cultural product, a legacy of an aristocratic history.

– art and artists can help expose the culture of nature

– “Look up The Goat Blocks, Sue!” So I did: The Goats and click on ‘How to be our next neighbourhood’

And something that sticks: 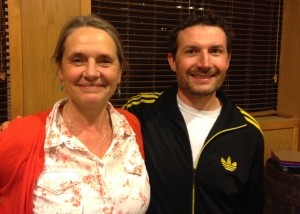 Such a great evening and I’m not sure this write up does it justice. I left, walking down the street, resounding with all the views and experiences from this wonderful cross section of people.

It’s inspiring – I want to start a sister group here where I live.

Then we can start twinning. Thanks Toby. Thanks PDX Eco Unite!