The Department of Bird Safety was an Artist Studio Fieldhouse Residency that ran from 2013 – 16 at the Queen Elizabeth Park in South East Vancouver, by artists Jesse Garbe and Genevieve Raiche-Savoie.

“Unlike windows, birds are disappearing in North America.” – Department of Bird Safety, 2014. 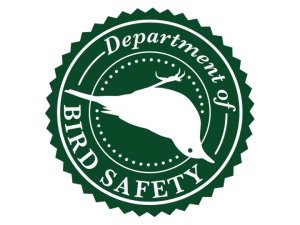 ‘As an artist/designer collective, The Department of Bird Safety is interested in producing socially engaged art that raises awareness about issues concerning endemic and migratory birds. We intend to engage and empower the community through a number of activities, including guided walks through local Vancouver neighborhoods that focus on birds and their habitats. We will also conduct workshops about art and how it can help people gain a greater understanding of our local ecology. We anticipate that through a program of research, outreach, and education, that people will start to take into account non-human uses of the city.’

This Fieldhouse Project had already concluded when I arrived in Vancouver, but I was very interested in it as it specifically brought together artistic and environmental practices.

I met Jesse to talk about birds, humans, art and the city. Jesse is a Sessional Instructor and Alumni of Emily Carr University of Art + Design, Vancouver.  His work examines our relationship with nature, and he is also an ‘avid bird watcher, citizen scientist and general advocate of the ornithological’.

“We are not distinct. We are evolved in nature.”

“More things than humans are happening in parks. A park is a cultural entity but also has the natural and ecological: nature and culture converge – it’s a dance between them.  A park is a constructed, contained and restricted place, maintained by people through aesthetic choices. Nature is becoming more and more restricted – freeways, fences and boundaries are restricting animal interactions.” 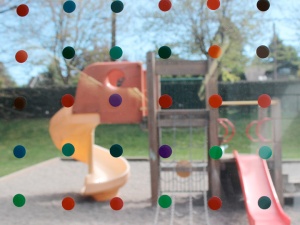 The Department of Bird Safety was a chance to actively explore some human – nature relationships over 2 years.

Jesse was interested in using art to motivate public policy.  Becoming members of and working with the Vancouver Bird Advisory Committee, the artists wanted to address the problem of birds hitting windows and colliding with glass – the very real issue of the amount of resident and migrating birds dying as a result of the volume of glass in the city.

Vancouver is perhaps exceptional in having developed its own Bird Strategy introduced and approved by the City Council early in 2015, aiming to be a world leader in supporting a rich and diverse group of native birds by 2020. The Vancouver Bird Advisory Committee is an ad hoc organisation made up of a group of individuals and community groups interested in birds. They also run Vancouver Bird Week, an annual celebration of native birds that reside or visit the city.

“I’m interested in animals having aesthetic appreciation. We clearly see that in some bird activity, for example the Bower Bird. Birds have heightened perceptions and some can see in ways that are way beyond our human capacity. I’m interested in their aesthetic sensibilities – what are the crossovers between them and humans?”

The artists were interested in bringing ideas together: of ‘seeing spots’ when you hit your head, the influence of Damien Hirst’s famous spot paintings, conceptual and contemporary art and the dot transfers already manufactured and produced by companies to put on glass windows and buildings to deter birds.

Through workshops, walks and talks and community engagement, the artists developed and designed a practical structure and art work that enabled people to participate as ‘helpers’ to make the project happen. Involvement was both functional and aesthetic – families, children, adults – anyone could participate.  And there’s empowerment too – to draw, to put up stickers, to help complete a project that can stop a bird dying and to know that it can have a real affect is an important part of the collaboration.

At West Point Community Centre in West Vancouver, dead birds had been found that had flown into glass.  The Department of Bird Safety organised a public workshop to cover the window in spots to apply close to 4,000 coloured dots/visual markers to the exterior of the centre’s windows in an effort to deter birds from colliding with the building. It was also an opportunity for people to understand how to make windows and glass bird friendly and carry that information back to their neighbourhoods, to their own houses. These are small acts of human-nature intervention that create cultural change. 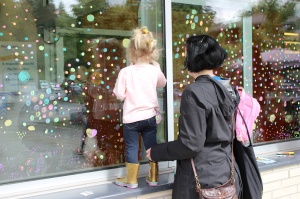 “The Fieldhouses are amazing spaces – they can build bridges between artists and communities. And the Artist Studio Residency was good.  You can’t pretend – it’s got to be something you really want to do, that you’re really interested in. We learned a lot about working with people. What does art do well? And what do you do well?  You’ve got to meet people where they’re at and then draw it out.”

“For me, artists cannot ignore the environmental and ecological challenges right now – they have to be part of our thinking.”

Go to The Department of Bird Safety blog to find out about all the activities and projects.