Mark Wallinger‘s exhibition ID, at Hauser & Wirth London from 26th February to 7th May 2016 is a wonderful thing.

‘…Wallinger encourages a contemplation of the self within a society in which behaviour and personal identity come under increasingly closer scrutiny. Wallinger utilises Sigmund Freud’s terms, id, ego and superego in an interrogation of the psyche, the self, and the subject.’ Hauser & Wirth

One of the most striking pieces in the completely absorbing exhibition, is Wallinger’s new video work Orrery.

4 widescreen televisions face each other on four sides of a square, except it isn’t a square, it feels like a circle.

On each of the TVs is an oak tree in the middle of a roundabout.

And the oak tree has been filmed over the four seasons, with each of the distinct ‘times’ on the four screens.

And when you stand in the middle of the square, it is a circle because each film is an endlessly playing loop of a circle of footage – a circle around an oak tree standing in a roundabout.

The work takes as its subject the New Fairlop Oak in the centre of Fullwell Cross roundabout in Barkingside, Essex. This tree was planted in 1951 as part of the Festival of Britain to commemorate the legendary Fairlop Oak that had stood for centuries in Hainault Forest. The work was created using an iPhone blue-tacked to the driver’s side window.

An ‘Orrery’ is a model of the solar system, a way of setting the moons and planets in motion around the sun as relative bodies in space, a model planetarium.

It makes you dizzy, mesmerised, a kind of swoon. It sets you in relative orbit with Mark Wallinger in his car with his phone, with the tree, the roundabout, with the spheres.

The oak tree on its island is a cameo of Britain destined to rotate in its tiny orbit endlessly. As the world around the tree revolves, the sun moves across the screen. This revolution of a municipal roundabout in Essex becomes a contemplation of the orbit of our planet around the sun and our place in the universe.

It’s a kind of mandala too – a circle held tightly within a square, with four gates held by a centrepoint, a metaphysical representation of the cosmos.

And in your gaze from the centrepoint, the oak tree travels continually across the seasons from leafless to green and back again, and yet is simultaneously held in each time frame in a ‘forever’ state. The tree is timeless and yet distinctive to each time period that is stimulated by light, the sun and the tilt of the earth. 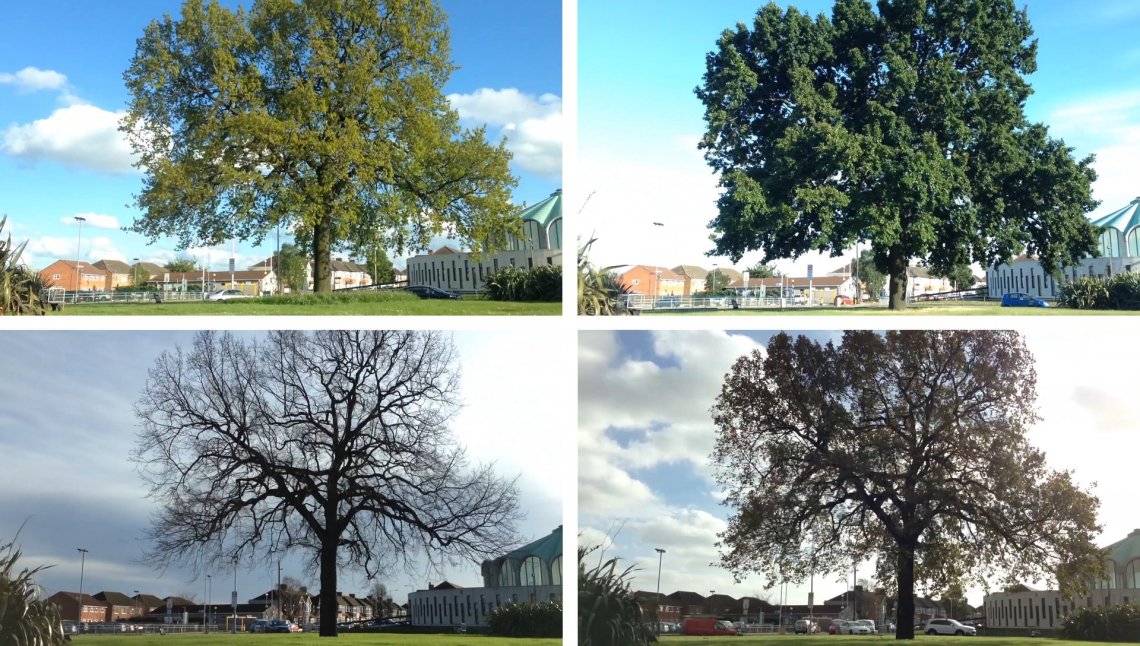 ‘Orrery’ relates strongly to all the other works in the exhibition, from the never ending mirrored all seeing Scotland Yard sign, to the iD paintings with their thick black shining oil paint on the canvases full of symmetrical body gestures, to the time both held and revolving in the London barber shop window.

It’s all an expansive planetarium – a “contemporary cosmology” as my friend Gretchen said – with (for me) the roundabout oak at its centre.

“Art has got to grow out of something that you’ve noticed, or that is dear to you, or important or just kind of part of your life… Some work might grow and become a bit more universal but they’ve got to have an initial spark.”

Read the Guardian review of the exhibition here.