‘Taking the form of paintings, sculptures or installations, the Brazilian artist’s hybrid work draws on urban design and plant life, on organic and structural forms, and on art and science. In this work, Oliveira plays with existing forms – the pillars that give the structure at Palais de Tokyo are extended to become an organic plant-like dimension as if the building itself had come to life.  The central motif is evocative of a synapse: a link between standardised architecture and the plant world that seems to have overrun it, inviting us into the microscopic neuromuscular world.’ (Adapted from the information text at the installation).

It’s a project of stunning complexity following out from a simple idea. Tapume wood sticks are rendered back into bark, and the architectural structure to trees, a knotting of forms and materials. 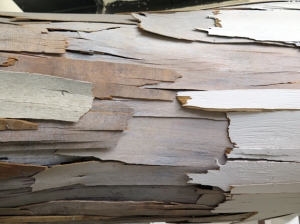 ‘a complex network of organic material invades the architecture at the palais de tokyo in paris, in brazilian artist henrique oliveira‘s ‘baitogogo’. the installation is a matrix of sculptural vegetation — unraveling, twisting, and plunging from existing pillars and beams. the massive form is both a hybrid of mediums and disciplines as well as a dimensional synthesis of site-specific structural elements. oliveira, known for his architectural integrations, manipulates the space by both extending and multiplying the columns, encasing the viewer in a dizzying circuit of knotted, root-like material. in a communion of urban design, plant life, and biology, the artist generates an immense audience reaction to the unexpected fusion of sculpture and space.

oliveira’s structural components are recycled from the brazilian urban landscape, consisting mainly of tapume wood sticks. the common construction material is typical to sao paolo streets, used to build fences or to isolate development sites from public access. using reclaimed wood native to his home as a medium, he references his brazilian culture and identity and reveals the physical and societal decay of much of the city’s urban fabric. oliveira draws influence from medical texts, biology and the study of physical pathologies such as tumors — evident in the complexity of his web-like structures, which liken themselves to the inter-connectivity of a human neural network.’

This text is from a Design Boom article on Oliveira’s Baitogogo. 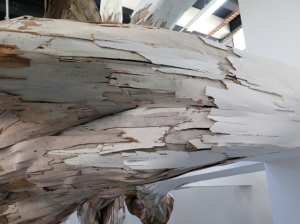 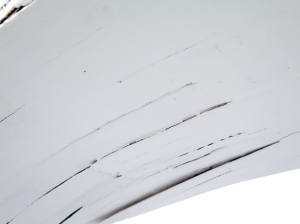 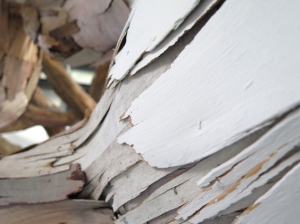 Watch a video about the construction of the work here and visit the Palais de Tokyo website that details the installation.