notes from the serpentine garden marathon 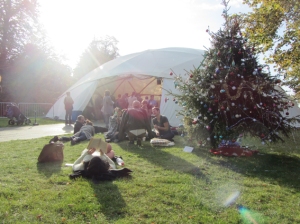 A really good sunny and cold weekend at the Serpentine Marathon on Gardens, with some of the 20 minute presentations so thought provoking and interesting that I need to write about them.  It’s a good feeling when you feel filled up with all kinds of things after someone has spoken about what wakes them up, about what they fill their life with, such that it makes me want to fill my life up with similar things.  So some notes on: Mierle Laderman Ukeles and the landscaped park of Fresh Kills landfill in New York, Richard Sennett and the Hortus Conclusus of Zumthor’s Serpentine Pavillion and Zuccotti Park, the art-life experiment FIELDCLUB, Something and Son’s design work and Hélène Cixous’s thoughts and connections.

The marathon took place in a dome outside the gallery, with the ‘christmas tree garden’ created by Hans Peter Feldman.

Firstly, an artist who has been an underlying influence on me ever since I first set eyes on a photograph of a woman with long hair reaching up to shake the hand of a garbage truck driver, with the caption ‘Touch Sanitation’ under it.  Mierle Laderman Ukeles, an artist who is ‘madly in love with the public domain and public culture seen as ‘The area where everyone, truly everyone, can be inside the picture’.  Her Manifesto for Maintenance Art, 1969! (pdf via this link) is still operative today’.  In 1977, she became the official, unsalaried artist-in-residence at the New York City Department of Sanitation.  There isn’t a cohesive representation of Ukeles on the web, which is mystifying given her extraordinary work and focus, but here are some links out: an article in Cabinet magazine details her thoughts after Fresh Kills was re-opened to receive the remains of the World Trade Centre, David Williams’ writing as part of his Underhistory series and there are other links at the side of this blog to her gallery representation.

On Sunday evening, Mierle spoke about her ongoing proposal: Transfer and Exchange: A Proposal for 1 Million Participants to Participate in an Artwork for Freshkills Park, NYC: Public Offerings Made by All Redeemed by All.   She spoke about the 150,000,000 tons of garbage accumulated over 50 years at Fresh Kills, New York, as “truly a social sculpture“, and asking “to whom do they belong?”  Contemplating the result of billions of individual decisions to reject in a culture where “desire is everything“, Mierle detailed the switch of an object’s meaning from one moment to the next: “Mattress, leaf, pills ….” the post desire moment where all objects become united through rejection, “the abject, a flux of disavowal“.

Mierle’s proposal for Transfer and Exchange aims to “redeem this land purposefully, to change the meaning of the material” through inviting all the residents and visitors to the city that have contributed to the landfill to acknowledge their role in creating Fresh Kills, to give objects of value, objects that can fit in the palm of your hand, to be released from private ownership and collected through ‘cultural transfer stations’ and reconfigured into a public artwork.  Embedded offerings would be sealed in perspex with a barcode enabling them to be traced by future generations: this is the opposite of rejection, instead becoming “intentional connections of value.” The link between her vision and Lone Twin’s current ‘The Boat Project‘ are resonant.

Richard Sennett drew out interconnectedness between two places and events: Peter Zumthor’s Garden at the Serpentine ‘Hortus Conclusus’ and the current ‘Occupy Wall Street‘ protest at Zuccotti Park in New York.  Having spent much of last week in Zuccotti plaza, and clearly moved by what he had encountered, Richard explored the notion of a ‘hortus conclusus’  – an enclosed garden – through using etymological references and thinking in relation to the square and the people in it: the protestors pressed together, a dense mass of different ‘species’ sleeping together, the ‘garden’ as a place to gain knowledge, ‘plants’ as a gateway to understanding, the rows of policemen surrounding the square two-deep in their navy uniforms paralleled with the dark walls enclosing Zumthor’s Garden.  Sennett spoke about Zuccotti being privately owned but looking and behaving as if it is public space.  One of the rules of the Square is no amplification, hence the repetition of a speaker’s words by the audience so that others across the area are able to hear – disarming for the speaker, continually energising for the audience “enacting their presence“.  “Is a pack of protesters a garden, a ‘hortus’?”   Asking questions about urban planning continually focusing on movement through the city, Sennett invited me to think about Zuccotti Square as a space which “suspends the body, divorcing it from the outside world and opening it out to something else,” – stillness, enclosure, a space for self knowledge – The Hortus Conclusus as “a suspension in time to recover the self“. 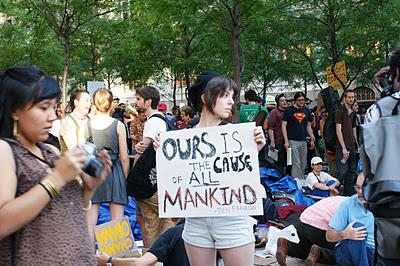 On Saturday night, Rodney Graham performed his piece ‘Lobbing Potatoes at a Gong’ – fantastic tones as the organic potatoes hit the gong, flying out of his hand one by one, many missing.  Later on that freezing cold night, the potatoes returned served up as the mash on a Shepherds Pie, and distributed free in small tubs to the entire audience. 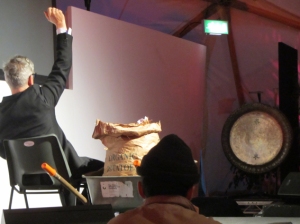 Paul Chaney – direct, alive and engaging – from FIELDCLUB gave a presentation on his work as an artist and researcher in his art-life project – a four acre off-grid, off-utility site near Falmouth.  Travelling through dark ecology, mechanised slug reduction, field vole genocide, under production, failure and bliss, he detailed some of the real and present challenges about sustainable living.  FIELDCLUB have designed a fantastic webtool – by working out how you want to live and what you want to eat, you can see how many other people in the UK would have to die in order for you to achieve your dreams.  Brilliant.

Something and Son’s work speaks for itself, so here is a link to their projects page.  Their design solutions, practical inventiveness, creative thinking and resourcefulness were striking and inspiring.

And finally Hélène Cixous, who in many ways, created a frame for me to participate within the weekend – her thoughtful and profound ideas circled round me:

We all want to get inside the garden …. The first dream is to have a garden, and perhaps that’s what the Garden of Eden was, a dream.

At the end, I realised I had always had a garden around me, yes a physical enclosed garden, let alone all the imagined gardens, ‘dream gardens’, ‘polyphonic gardens’ …..

From my earliest memories of the huge lawn and vegetable bed at Witham Friary, to the back and front gardens at The Haven, to my 25 year old enclosed flower garden in Glastonbury, the walled garden in South Brent, to the shady border in St Margarets, to all the gardens I’ve helped with or given plants to, that I’ve wandered through, slept inside: gardens have accompanied me my entire life.  While I’ve always known this, I was suffused with that realisation through the Garden Marathon.